This collection is comprised of phone charms modeled after the dot sprites of Pokémon in the Unovan Pokédex. These charms can be hung from the earphone jacks of most electronics, and can be detached from their straps. Additionally, all newly purchased charms contained a password on the inner packaging which could be used to enter onto a website to download a smartphone wallpaper of the dot sprite you purchased.

There were a total of 173 Unovan Pokémon (including their different forms) available in the initial wave in this dot sprite form. They retailed for 350円 each. Although Genesect is an Unovan Pokémon, it was released at a later date. Pikachu, Charizard, Eevee and its evolutions (not including Sylveon) were also given dot sprite charms.

A charm collection box was also given via lottery by the Pokémon Daisuki Club to commemorate the initial release of these charms. A total of 10 were given away to winners.

All Gen V Pokemon, including gender and alternative forms (except Genesect). 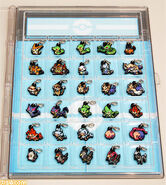 Collection box in use
Add a photo to this gallery

Retrieved from "https://pkmncollectors.fandom.com/wiki/Dot_Sprite_Charm?oldid=27221"
Community content is available under CC-BY-SA unless otherwise noted.