Start a Wiki
The Bound Ball (バウンドボール) series features squishy round Pokemon that are reminiscent of Poké Balls in their shape. The balls are about 4 inches in circumference and made of a soft foam material, much like a stress ball. They come in colorful gachapon balls but many are not found in their original packaging due to their age. They seem to only exist for Generation 1 and 2 Pokémon, and were released in 1998.

Some Bound Balls, such as Bulbasaur and Pikachu, were re-released in Europe under Hasbro, but were no longer squishy. Instead, they were firm, and when hit on the back, would talk. See Jammer for more information. 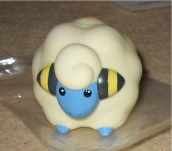 Add a photo to this gallery

This article is a stub. You can help Pokemon Collectors Wiki by expanding it.

Retrieved from "https://pkmncollectors.fandom.com/wiki/Bound_Ball?oldid=15693"
Community content is available under CC-BY-SA unless otherwise noted.